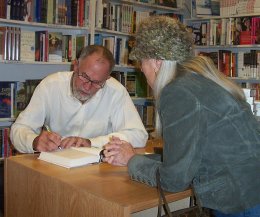 I’ve been looking forward to this one for a while and thankfully I got to The Framery early, as it was standing room only by 7 p.m. Gordon Campbell is an interesting speaker — he gave us the background of the book and how much Betsy helped him get Missing Witness into our eager hands:

In this electrifying debut thriller, a brilliant defense lawyer takes on a murder case with ingenious twists.

Phoenix, Arizona, 1973. A beautiful woman, armed with a gun and accompanied by her twelve-year-old daughter, enters a house. Shots are fired. The woman and her daughter leave the house. Inside, her husband lies dead.

The case seems open and shut. The cops, the attorney general’s office, and the media are certain the woman is guilty. The only witness to the shooting is in a catatonic state and cannot testify. But the murdered man’s wealthy father believes he owes the woman something and hires Dan Morgan, the best lawyer in Phoenix, to defend her.

When the legendary criminal attorney takes on a case it’s to win, no matter what the odds. But for Morgan and his young protege, Doug McKenzie, there are no easy answers, only mysteries, and the question of innocence and guilt take on profound new meaning.

Combining the riveting suspense of “Presumed Innocent” with the raw ambition and power of “All the King’s Men,” this full-bodied novel introduces a writer of great skill and insight into the human character.

As part of his wrap-up he likened TKE to Shakespeare and Company in Paris, France and Betsy to Sylvia Beach. Wow, now that’s a compliment! Then it was back to the store for the signing, which was huge. We were sending people out through the back to keep traffic flowing. All in all a fun and informative evening, and best of all Gordon says he’s working on a second book. Can’t wait!

This entry was posted on Thursday, September 27th, 2007 at 1:43 pm and is filed under Authors. You can follow any responses to this entry through the RSS 2.0 feed. You can leave a response, or trackback from your own site.